2-24-07
Hello from Kabul!
We finally made it! It's 6:45pm here, 9:15am there -- yea it's a weird time zone apparently. We basically didn't sleep last night but we finally got up at like 4 and made our way to the aiport only to be told to wait until 6:30 which turned into 7:15 but the attendant got us on the flight. We had to pay extra for being UNDER the baggage weight -- yea, UNDER!Funny thing is Jamison had more weight than I but we had to pay the same amount - it was basically a "screw you American tax" we think because we were the only ones to pay it. Anyway, the flight was nice --I got to sit in 1st class! Well, the big leather chair with more legroom was about all the difference it was on the flight but I'll take it.

The Afghan landscape is amazing. The mountains are tall, bigger than the Rockies, and they totally emcompass the city of Kabul. In the airport this morning we met some others who work in Kabul and have for 3 yrs, and another guy working security for another outfit. I got some good information from the other two of things to watch out for but also found out from Deana, an Aussie lady, that Sunday and Wednesday are salsa nights, Monday is trivia -- they had to make sure we knew the important stuff! I sat next to a Bulgarian banker on the flight and got more info from him.

Once on the ground in Kabul, you quickly realize you ain't in Kansas anymoreToto! Soldiers running drills just off the runway, soldiers greet the plane, soldiers shuffle you through passport check and baggage claim -- all the while looking at you in a very intimindating manner, even though they're not packing guns. This one lady US Army Capt. almost got herself in trouble. She was packing heat, as was her partner, and they were waiting for some folks on our flight. Well, she kept trying to come inside the terminal and the UN guy kept telling her she wasn't allowed inside with her guns. It's stuff like that which makes ya wonder what we think as Americans sometimes. Why did she persist? There was no reason and all it did was upset the local police who are trying to maintain the rules.

Outside the terminal, our security force was not there. We carried our bags past several guys with guns and other folks were getting shuffled by their security teams into SUV's. I met a guy from SOC, another security detail, and he let me call our guys. Apparently they had called to find out when the flight was coming in and were told 12:30 so they were shocked that we got here at like 11:30. Anyway, it all worked out. One of the locals came up and talked with us for a bit. He works with the tourism board and with airport security and was not pushy but very nice. Once meeting our security detail, they all seem very nice and take their job VERY seriously. They're carrying AK-47's, dress in plain clothes, and drive Toyota 4-Runners -- they like to keep a low profile. The other security details are all in military dress with vests full of shell slings trying to be all bad. Our guys are mostly Scottish, turns out, so I'll likely come home with a touch of Scottish accent!

Even with the unsurety at the airport, it's not really an uncomfortable place. It's really below the poverty line, though, but that doesn't stop folks.Everyone is out buying and selling and playing soccer and doing things, not staying inside or cowling about. That says a lot about the people and their motivation to make this a better place. There's mud everywhere right now because of the thawing in the mountains. Our road is nothing but mud and holes bigger than our SUV! There are "improved" roads but not in the neighborhoods yet.

Tomorrow we'll head over to Camp Eggers and get some briefing over there about our work and the lay of the land there. Apparently that's where we grocery shop and such as well. I'm gonna head downstairs and watch some rugby with the guys on the satellite TV. I guess England's playing Ireland so it ought to be a good game.

I'll get some pictures up tomorrow or Monday. Thank you all for the emails and prayers. I appreciate them very much!
Posted by Charles Myrick at 12:29 PM No comments:


Well, since we were given an extra day in Dubai, we decided to make the most of it. It's about 3:15pm here and already we've taken quite a stroll about town. We walked to the Naif Souq (spice market) where we went last night, then went for a water taxi tour of the Creek before grabbing lunch. Before departing for that little venture, we tred to track down the Kam Air office only to learn that since today is the Arab world's version of Sunday, the office was closed. The bellhop here at the hotel got us in touch with the Kam Air people via their cell numbers and they had no idea of the situation in Kabul, saying their flight left this morning on schedule. I asked them about getting on the flight tomorrow and the guy just told me to show up in the morning and we'd have seats. Well, that's what we hope to do, but it means tonight is an early night for us, like we thought last night would be. We have to be at the airport by 6:00am, so hopefully this will work.


When I left the States, I knew that one word would have to define this journey: flexibility. Well, we're taking it in stride and trying to make the most of our little break here in Dubai before jaunting off to Kabul, for once we arrive there I'm afraid we'll be in a totally different world, even though it's only a two hour flight from where we currently sit.

Enough with the jabberwocky, here are some pictures from last night and today. 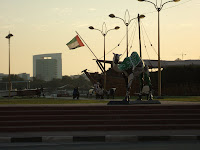 Look -- It's a painted camel, like our painted cows. Apparently all peoples are more similar than we think! I wonder what they were raising money and awareness for. 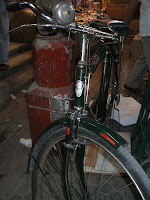 Here's a sampling of the bicycle that most folks ride. It's a Hero cruiser but the interesting thing is....there are no cables on this bike! That's right, click on the picture and look at the brake lines -- they're s/s metal rods. The owner of this bike tried to sell it to me for 150 AED, which isn't a bad price, but it would cost me much more than that to get it home! 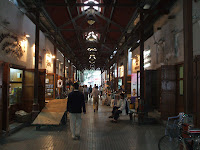 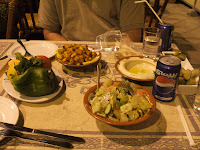 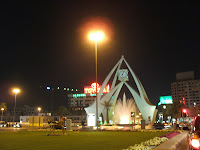 We must have passed this fountain every time we went somewhere. I'm convinced it's like the Big Chicken -- all directions are given from here! "Well, ya get to the pyramid fountain and go...." 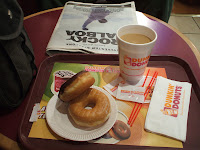 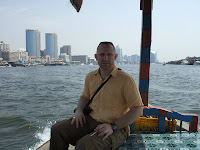 This was from the boat tour on the Creek. If they call this a creek, I'd hate to see what they call a river! 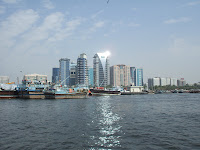 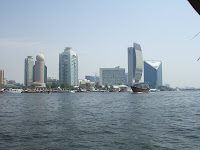 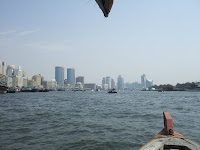 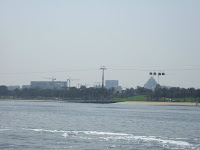 Look at those tower cranes! There are no fewer than 20 tower cranes within 10 minutes of our hotel. That means lots of construction. We didn't make over to the Jumeirah area, but that's where the 7-star hotel is and the Palms and where the new world's tallest hotel is being built. There's a lot of opportunity for construction folks over here ;)

Well, that's about all for now. I hope you've enjoyed your little tour of Dubai today! Hopefully the next pictures you see will be from Kabul.

Posted by Charles Myrick at 6:15 AM 2 comments:

We just received word from Kabul that our flight is to be rescheduled for arrival to Kabul on Saturday. Apparently the 23rd is Afghanistan's Independance Day so they're inthe middle of celebrating there freedom from Russian rule and all the airports are locked down. HMPH! Seems like our folks would have known this before we got on airplanes, but I don't mind getting to spend another day in Dubai. It's really nice here and there's a lot of construction going on so I may go job hunting tomorrow! HA!! The people are super friendly and the driving is nutso! If you think Atlanta has bad driving, you ain't seen nuthin' yet! However, I've only seen one car with any dents or damage. It's a very controlled chaos.

We found a nice little market and did some shopping in the little time we had before dinner. I have some pictures that I'll post tomorrow, but given that it's 1:30 am here, I'm off to bed!

Oh, I'm told not to be concerned about the lockdown, it's just a security measure. I'll know more tomorrow but hey, we may end up with another two days in Dubai, who knows?!

Cheers!
Posted by Charles Myrick at 4:21 PM No comments:

2-22-07
Greeetings from the Renaissance Dubai Hotel!! My coworker, Jamison, and I got into Dubai last night and it was a pretty standard arrival into town evening. Got our luggage -- yes, it all made it -- got checked in at the hotel, then grabbed dinner. You know how it is, you want to try new stuff when you're in a new place and we heard this Cuban band playing in one of the hotel restaurants so that's where we wanted to eat. However, since we changed out of our traveling shoes -- literally-- and put on flip flops, we didn't meet the dress code for that one! Oh, it's so warm here which we are surprised at given that the weather we were expecting was supposed to be in the 50's. (I'm gonna have to learn the C > F conversion so I can understand the weather around these parts!). So for dinner we ended up at Harry's Place, an American styled restaurant / bar complete with am Asian band singing American pop tunes, and they did a relatively decent job with them too!

Not long after dinner it time for a shower and bed. I'd been up since 7:00am EST Tuesday and got to bed last night at like 4:00 p m EST, which means I'd been up for.....33 hours (is that right?). Now, the hotel is nice, but these beds -- WOW!!!! I've never in my life laid on something so much like a cloud! Needless to say, it didn't take long for me to pass out. I woke up a few times just being in a strange place and hearing weird noises, but when I finally looked at my watch and saw it was 3:30 pm local time, I freaked a bit because I'd just lost an entire day -- my first full day in a foreign country and I want to go see the place!

As we traveled to the hotel last night, we passed this place that had a showroom packed full of fully restored classic American trucks -- Chevy, Ford, Dodge -- and Jamison and I both went crazy at the sight! It was most wonderful to see so I'm sure we're going to go there at some point today or tomorrow before we leave. It's actually kind of funny to see the only cars on the road are all American companies. We rode in a Chevy Venture taxi van last night and the Dubai taxi company uses all Chevy and Ford.

Well, sorry no pictures yet. I didn't want to be a silly tourist snapping pictures of airports and the plane we flew on, and the front of the hotel at night then again in the morning. I may get a picture of the bed I slept on, however, because THAT was worth a picture!

I appreciate all the emails and encouragement. Know that you're all in my prayers and thoughts. Time to go see the city!
Posted by Charles Myrick at 7:18 AM No comments: