Two 100-mile mtn bike races in two weeks. Not a bad way to start off the riding season! Yesterday's race was held at Ft Yargo State Park in Winder, GA just south of Athens (for all you Dawg fans). The weather report was 60% chance of thunderstorms but I had been praying all that God would hold back the rain or divert it or something, mostly because I don't have the money laying about to rebuild the drivetrain a second time in two weeks! Rainy mtn bike races wreak havoc on bike parts.

Anyway, all was going well -- got to the arena fine and found our pit area. Oh, I should mention that I was pitting with Xray_Ed, PedalHard, and Nikki. Duckman was nextdoor and was quite the friend by saving our spot for us when he got out there on Friday. The girls from Sorella Cycling were on the other side of Duck and it seemed that there were 30 people over there and I don't think they stopped bringing stuff from their cars until the race was over - it was an endless supply chain! On our other side was Carebear, Shane, and Scott. All in all, surrounded by good folks.

Race start was 10am and so far not a drop of rain. During the first hour and half, however, there were some very light showers on the east side of the lake which simply knocked the dust down and packed the trail in a bit better. Otherwise, the Lord heard the prayers of this sinner and diverted the rain to the south of the race! Not that I was the only one praying He would hold off the rain, mind you. Anywho...I was well hydrated and fueled and had a basic nutrition plan lined out for the day.

My goal was 100 miles then see how I felt and how much time was left. The format for Yargo varied from the Cohutta race in that this was a 12 mile lap and the goal was to complete as many laps before the time cut off as you could. I made short stops after each lap for food and bike adjustments. Some breaks were a bit longer than others but I was okay with it.

Halfway in, at the 50 mile mark for me, I made a nutrition error that you don't hear much about -- I ate too much. Most folks eat too little at these things. Well, I now had to deal with the fact that I was asking my bodt to digest this extra food while still producing the same power it had been. Nothin' doin! Miles 51 to about 65 sucked as I struggled about the course. Finally, I came to the realization that I was completely overthinking this issue and I needed to just ride my bike and have fun! After all, the I'm not honoring anyone represented on my jersey by feeling sorry for myself here. Once I got past that, I did start enjoying the ride again. Unfortunately, my average speed had dropped almost 1 mph which I had to work hard to make up. (I never did).

In summary, I got schooled by the legendary Norma Rainwater who, although we were leap frogging each other on course, finished a lap up on me. I also got schooled by Xray_Ed and Duckman who are both further along in years than I, but my consolation is that neither had done the 100 miler at Cohutta ;)

Pictures below:
1. Thanks to Duckman, pre-race -- No I didn't pose for this, he caught me doing a mental check on my gear
2. The mass start
3. A nice jump to have made had I known there'd be a photographer there and what the landing zone looked like. Well, that and self preservation since this was taken on lap 2. 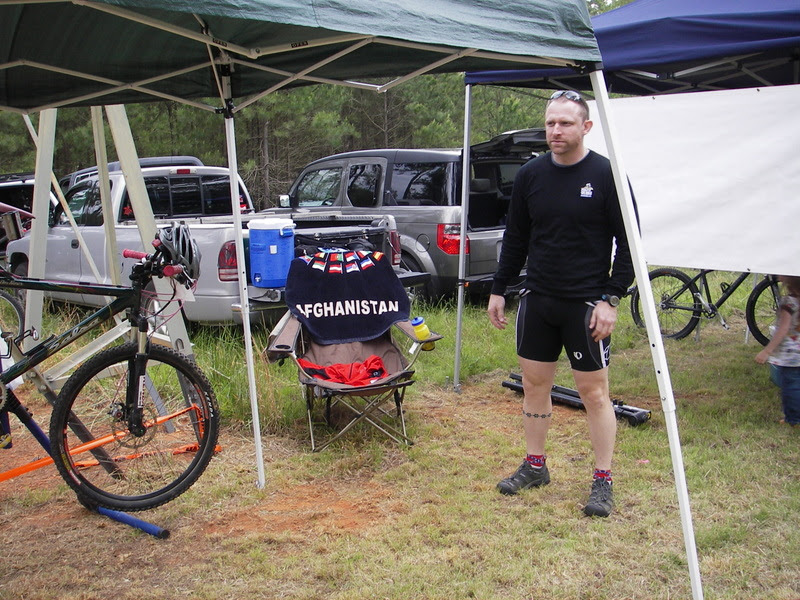 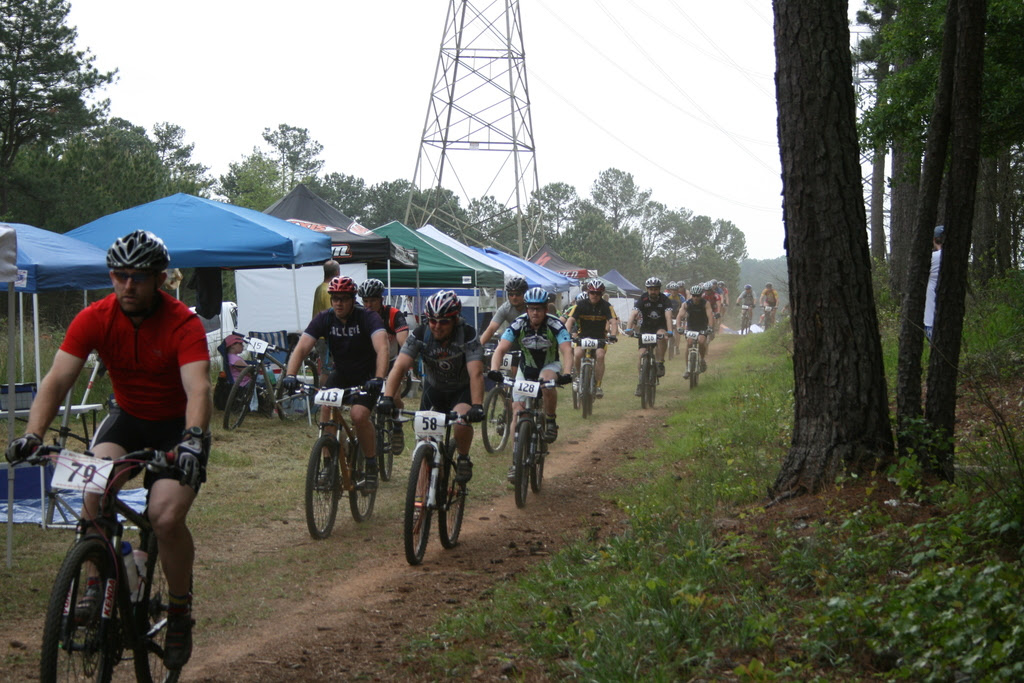 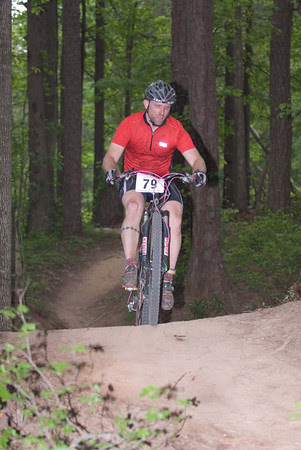