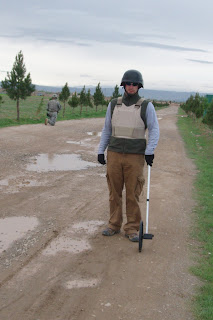 4-3-07
"Picture pages, picture pages, time to get your picture pages. Time to get your pad and your pencil!" Ok, if you know where that's from, you're allright! If you don't, well, go ask your parents!
So I went on a little excursion to a western province last week and got to spend 5 days with some pretty cool guys. They're all Colonels and 3 of the 4 actually came here voluntarily out of retirement. I won't bore you with a lot of words this time, just pictures of me from various places last week. I hope you enjoy!
First, me measuring off a potential site for a facility. Proof that I am actually working! I need to fix my vest situation -- that one looks too much like a target. But hey, it's what our Blue H guys have. Not that it'll save me from IED, but it WILL stop an AK round if shot directly at that little plate! 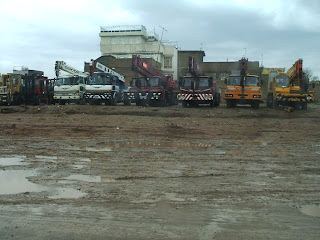 Construction guy had to toss in construction equipment pictures sometime! 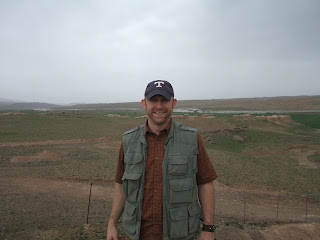 In the background is a small village near one of the training facilities we're building. 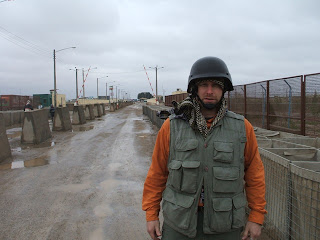 Ah-hah! Now the fun begins....that's the Iranian border behind me. And it was very cold that day. The above picture was taken the day before and as you can see, the weather took a turn for the worst. 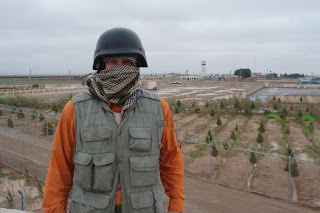 Another shot from the border.... 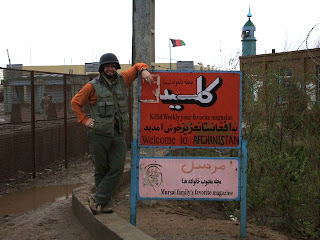 Proof that I am actually in Afghanistan, in case we had forgotten! 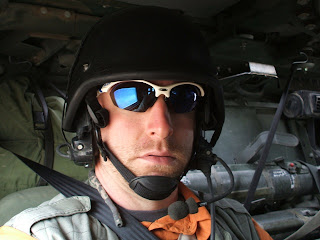 Suited up in the HumVee. I'm sending this picture to Rudy Project for their "Show us your Rudy's" picture contest. I bet they never thought they're glasses would be worn in a combat zone. 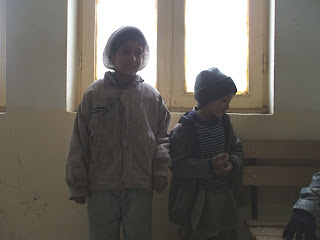 These were some boys in the passport control office at the border. 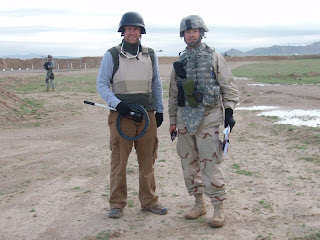 The Cdr and I after surveying the site for a facility. Cool guy from northern VA. He's a Navy SeeBee working with the military agency that is leading this work. I could go on and brag here that the Navy guys are actually about to take control of that group because the Army guys are all phasing out. But then I'd upset a Col. or three and would have to make up for it. Oh, I know, Sir, we'll name the South Camp at A-skan for ya! Jack's Stop and Drop! (inside joke ya'll-- you'd a had to been there!)

Posted by Charles Myrick at 11:54 AM No comments: