3-10-07
Who has my house keys? I'm sitting here wrapping up the work day and just had this fear come over me that I have absolutely no idea whatsoever who has my house keys? Is it my parents? Is it one of my friends? Did I leave them on the counter? Not a clue. My folks took me to the airport and I think I left my keys with them. I hope so!

I miss my dogs. My mom told me that they haven't chewed or destroyed anything -- WHEW! I'll tell ya this, the first day I'm home, those dogs aren't leaving my side!

And I'm going for a drive -- just to go for a drive and see my city again. I'll drive my truck with my dogs in the back eatin' it up!

I'll eat lunch at Chick-Fil-A. Yessir. That is where I'll eat lunch. And breakfast or dinner will be at Cracker Barrel. You betcha! And my dogs are comin' with me; the managers are just going to have to understand. And I'm oh so sure they will. {rolling eyes}

So I just moved upstairs to the 3rd floor where I now have a private room. No more snoring roomie. No more of having someone else ALWAYS 3 feet from me. I'll be able to make phone calls without having him in my ear talking to his family. Not that it's bad, it's just that neither of us have had any privacy since we got on the plane in Atlanta. Everyone else here has private rooms. Now we do too. Maybe he's used to it because he's married with 3 kids and since I'm not married and don't have a roommate, I'm not used to it. I'll get you all some pictures of the new digs later on, but it's 3 walls of windows and it's above the power lines so I have clear view to the mountains beyond.

I'm missing my workouts. In order to get a workout, I can't just walk to the base. I can't just drive to the base. I have to coordinate it with everyone else in the house and figure out where my little workouts fit in with everyone's dinner plans because we have 7 people and 2 SUV's. It'll be nice to just take the dogs for a walk around my block. It'll be nice to get on my bicycle and take off down the street when I get home.

I guess you could say I'm in a bit of a slump. I'm not stressed out, I'm not upset, I'm no less thrilled to be here. I just miss the freedoms I'm accustomed to. Last night I just sat in the living room and watched TV, something I've not done in quite some time (since before I left the States).

Cheers all!
Posted by Charles Myrick at 7:02 AM 1 comment: 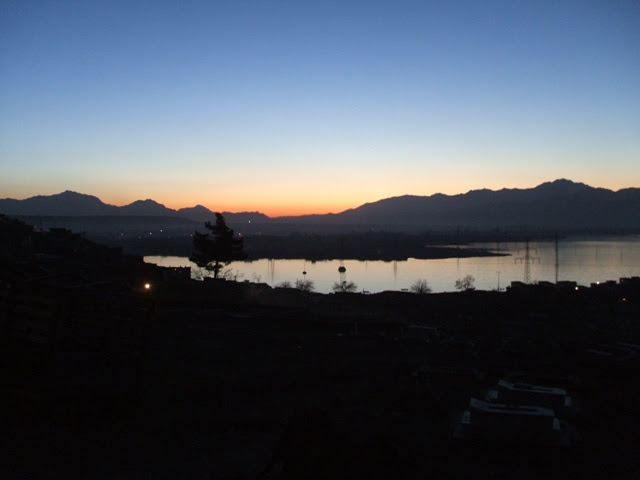 3-6-07
Today got started the best a day could.....with a hike! I'll let the pictures do the talking, but a few of us went out at 5:30am to catch a sunrise hike up and over Shir Darwaza, a mountain that separates Kabul into North and South. There's a wall along the ridgeline that was used to defend the city at some point in history -- I'll have to research that. However, there are records of recent fighting there as well, which is evident by the empty .50cal shells I found along the trail. Now, this was one of those hikes where we were instructed to stay on trail, because there are still mines scattered about. Who would plant them up there? Someone crazy, that's who! Attendees on the hike included Smudge, Frank, Matt, Scottie, Ralph, Jamison, Tillie the bomb dog, and myself. (The first 4 names on that list are guys from Blue H, so we were in no danger at any time)!
Our hike started and ended in two different villages, and I cannot describe the poverty we saw. There is no central sanitation system so basically there's a pipe coming out of the house that is to remove the "stuff" from the homes, but it just gets it outside onto the ground. Kabul is a beautiful city with magnificent landscapes surrounding it, but I'm afraid the residents don't enjoy it as much as we do.
Top of the Shir Darwaza is about 2300 m, and the elevation of the city os about 2000m above sea level. Hopefully you'll enjoy the pictures! 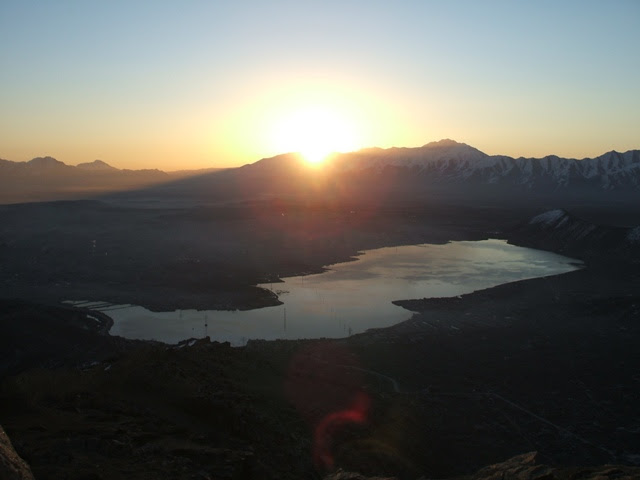 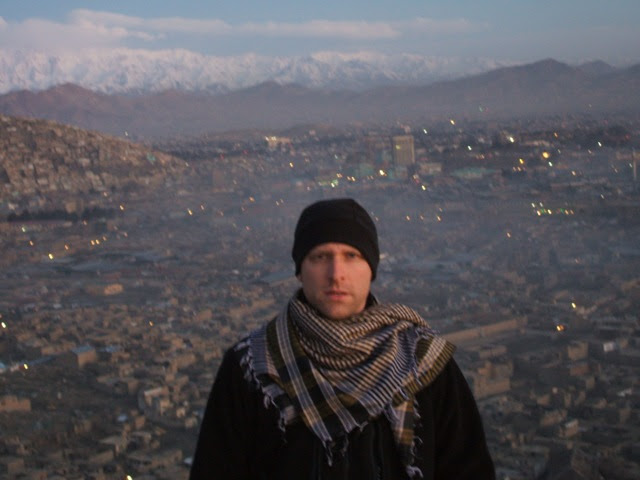 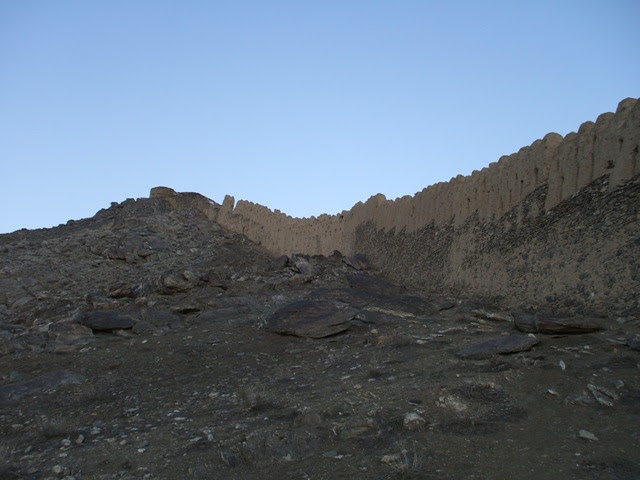 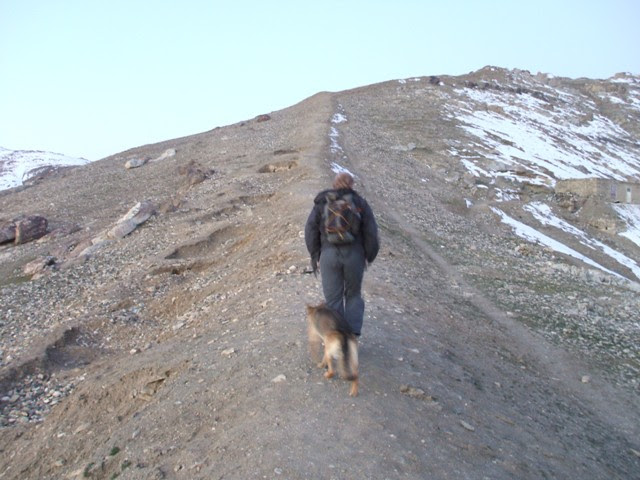 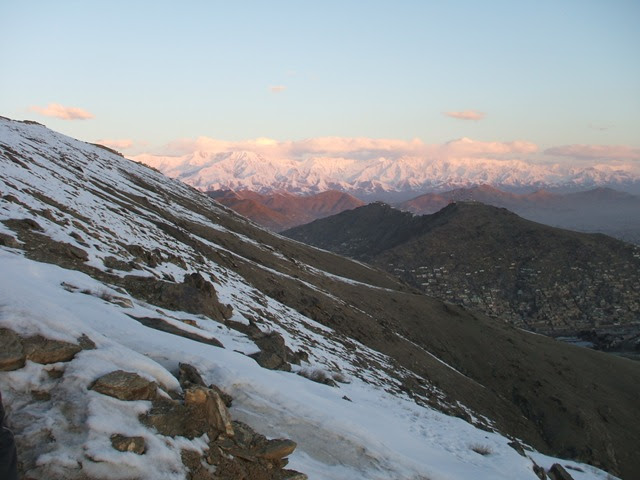 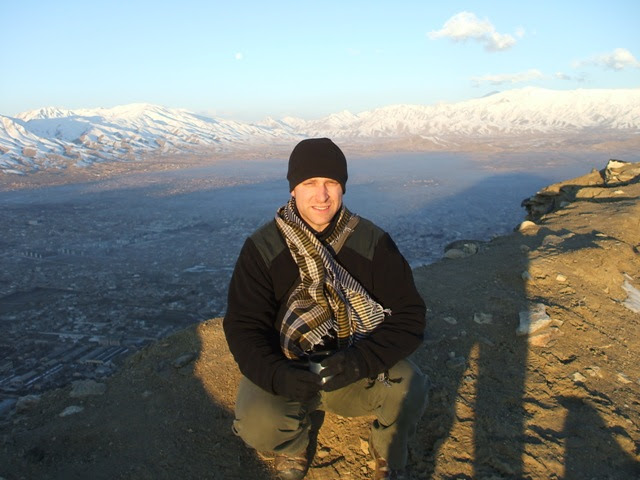 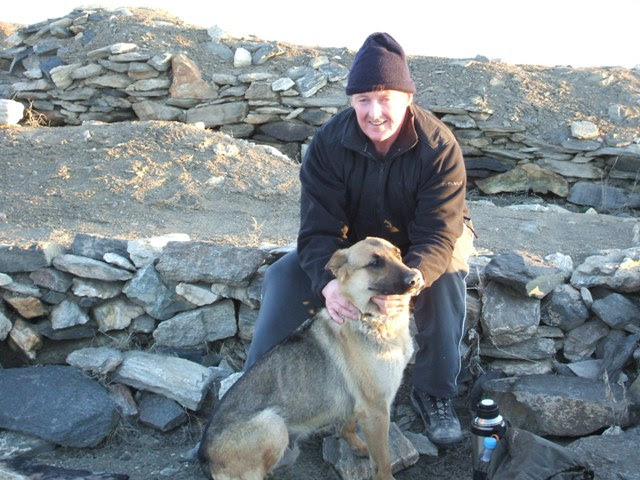 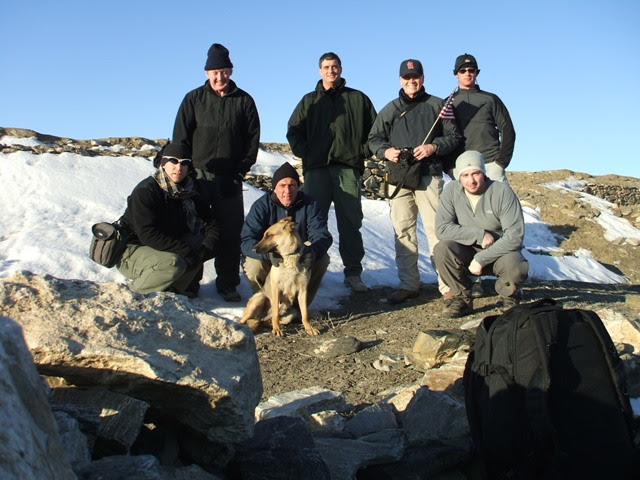 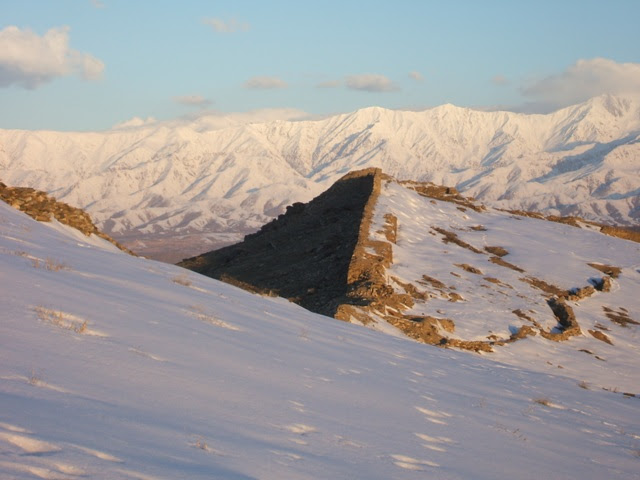 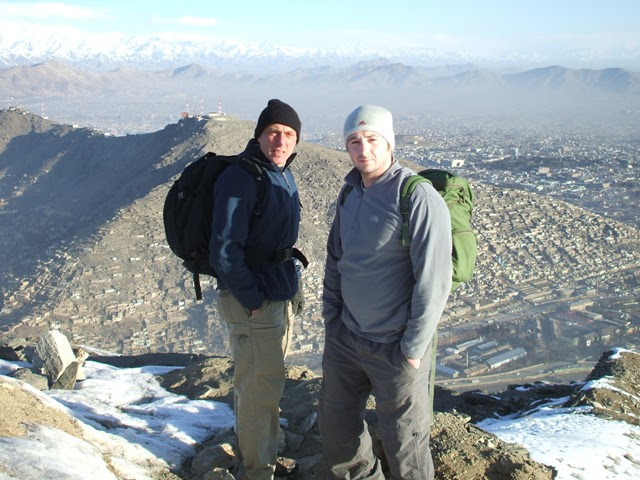 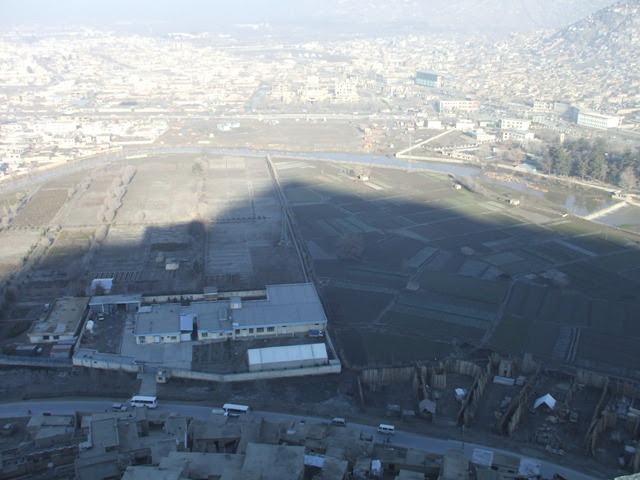 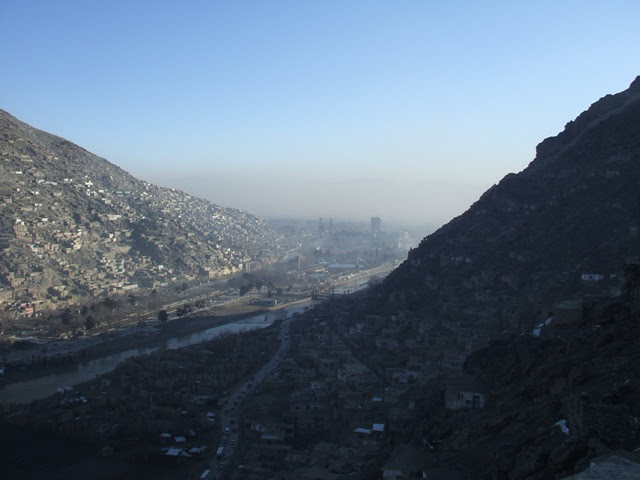 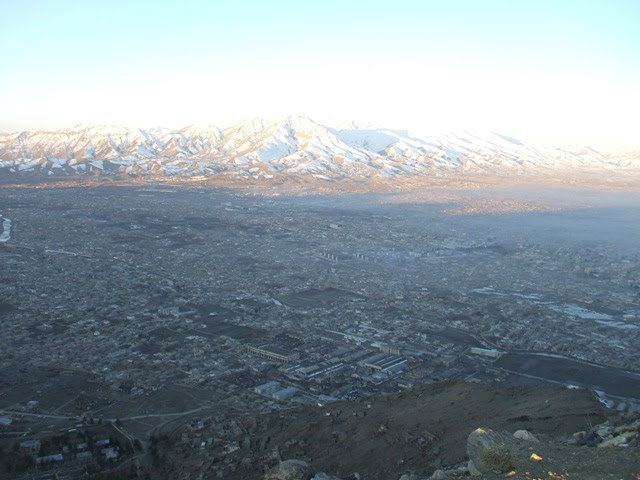 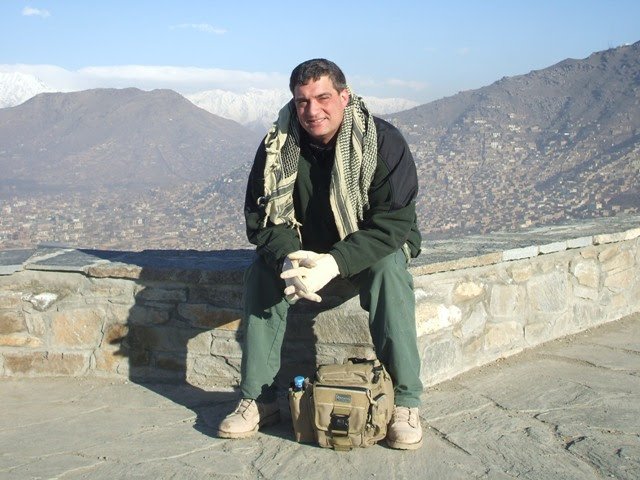 3-4-07
Today is Yak shanbe (Sunday) the charoom (4th) roz (day) of mars (March). Ha! I'm sure there's a more proper way to put that, but I have to put my new Dari language dictionaries to use sometime, eh?
Well, thanks to a Marine I met on Friday night at a campfire on base, I found out there are church services on Yak shanbe at 1100 and 1900 hours at the Camp. Given that we work on Sunday here, I was able to make the 1900 service (7:00pm) and I'm glad I was able to go. The worship was contemporary with a small praise team and the Word was delivered by one of the new chaplains on base. Chaplain Shaw is a gospel minister from Alabama and I promise you, he almost broke loose a couple times and we came really close to havin' us some CHURCH! It was extremely refreshing. The passage that he used for his message is one of my favorites, from Ex. 33:13-23 where Moses asks God to show him the Glory!
The format was very camp meeting like. The Chaplain asked after the worship time if anyone had anything to testify and folks did. We took communion after the message, and he asked for prayer requests before a brief prayer time.
On that subject, please keep a young Naval officer in your prayers. A few days ago, Lt. Rob (I won't post last names) was in the infirmery with what he thought was a cold. He left there in a coma. He was airlifted to Germany where his condition did not improve and now he is at Besthesda Naval Hospital. His wife is with him, but there has been no change in his condition. I'm sure there are a hundred other stories like this, but this is one I heard of tonight. Please add this family to your prayers. I'm not sure if I'll be able to get any updates, but I am going to try and find out where the Chaplain's offices are and pop in on them from time to time, so maybe I will.
Let's see...what else. Oh, I did mention about my laptop crashing. The good folks I work with in Atlanta are getting me a new one out on Monday I do believe. I've had a webcam up for about 1 day, so when I get the chance to get a new cam, I will and I'll try to get a short film of our offices and inside of the villa, maybe getting some of the faces I work with as well. I've never done anything like that so it may take me some work to figure out, but I'll do what I can. I wish I could take pictures on the base, because I've seen some great opportunities to capture the geography surrounding Kabul with an Army tent or flag or sand bag wall or armored HumVee. I understand the reasoning, but it would still be nice to capture.
Okay, I know I've spoiled you all with pictures so here are a few more. We had the chance to buy some local things at a bazaar on Friday so here are some of my findings. 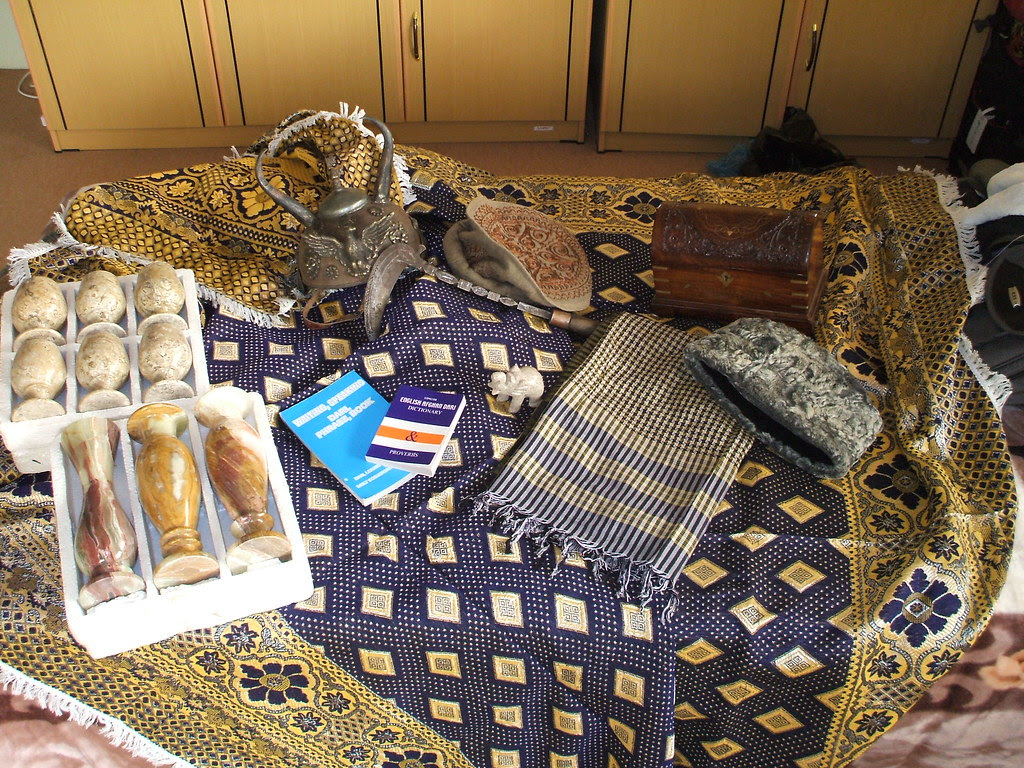 See those marble goblets and vases? They cost me less than $40 total! Don't feel skimped if you're one of the lucky ones to get a marble vase as a gift, though, remember I'm the one who has to carry 'em home! The blue and gold thing there is a bedspread and matching pillow cases which I got for $5. 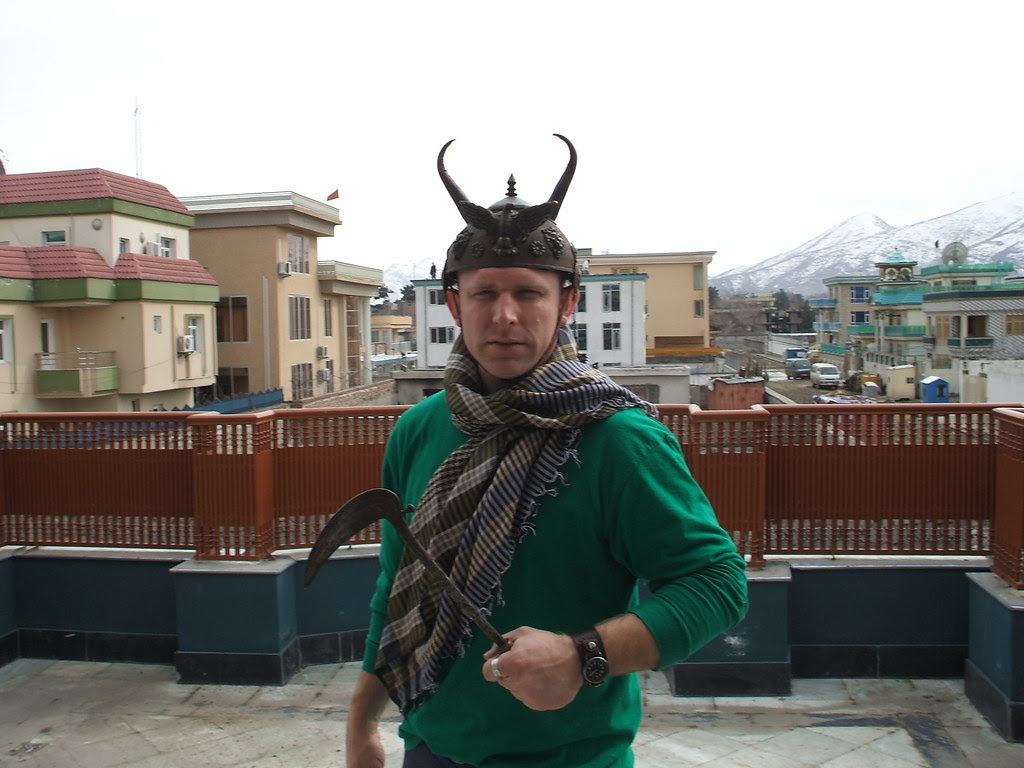 Here's my Ghengis Khan warrior helmet! It'll be a good thing to hang on a shelf. I'm not sure how old it REALLY is, but it's cool nonetheless. The thing in my hand is a tool used to harvest vegetables, not a tool of war, but it just looks cool with the helmet! 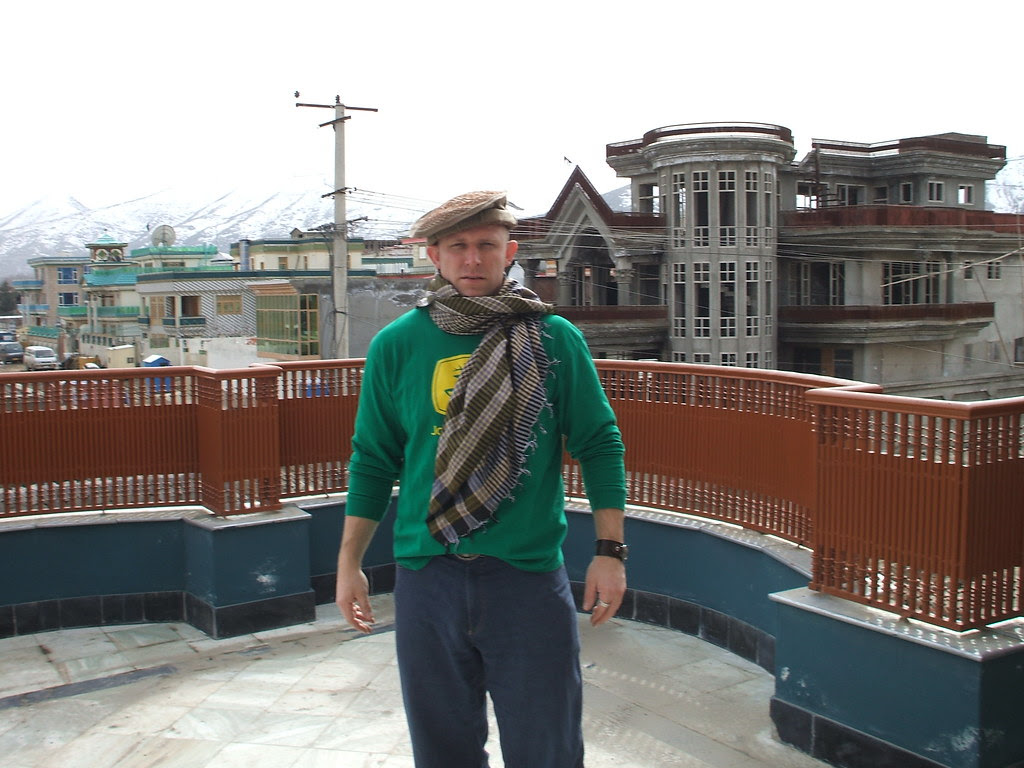 Is he French or Afghani? The hat was made popular by Masud, the "Lion of the Panjshir", Tajik mujahed commander of the JIA and then top military chief of the anti-Taliban Northern Alliance. He was assassinated in 2001.


Okay, that's enough for tonight. Oh, and in case you're interested, the attack that you're hearing about on the news today occured on the Jalalabad Rd near the city of Jalalabad. It was not near Kabul, but over the mountain from us. Everything is still quiet here. And I'm keeping you guys back home in prayer as well. I saw the results of the tornados that ripped through south GA and I'm about to call home and check on my folks. I spoke with my sister earlier and she said there was some damage in Macon at my parent's house. I also heard that a friend in Americus sustained some damage to their home and business.
Posted by Charles Myrick at 12:52 PM No comments: