The quick and dirty review: I raced with Kirstin Reff, adventure racer who was outta shape this time around -- bad girl! That's okay, she got her fair share of the big hurt. Truth be told, Kirstin's a tough rider who (for some reason) has taken the last couple of months off from mountain biking and has just been on her road bike. Great training, but not for Pisgah. Our game plan: enjoy the ride! Use this for training going into the winter months. I'm planning to do my first off road century in April and I just wanted two good days in Pisgah.

Day 1: Mandatory CP at Farlow Gap. We took off from White Pines and headed to Fish Hatchery where we picked up Cat Gap Loop (yes, we hiked it) and took that to Butter Gap. Butter Gap to Long Branch to Glouchester Gap to Farlow Gap. I was having chain issues and my only climbing gear was 2-1 so I was turning a 34-34. Not bad for the Farlow climb, but I had to fix that little problem before Day 2. We found out on the way up to Farlow Gap that there was a bear hunt in progress with dogs on the run. Since the informant didn't advise of any danger to us after having advised him of our potential route, we rode on not giving it another thought. Besides, we had a headwind up to Farlow that was our main concern at that moment.

Once at Farlow, we refueled the bodies and took off down FS140A. At the bottom, Kirstin took a swim in a little pool of VERY muddy water. That's what ya get when you don't stop in time! We gave a group of bear hunters something funny to break up their day. We found out that the bear was about 400 pounds and coming around the ridge not far behind us - now they tell us! After a brief attempt to get the CP at Courthouse Falls, we decided things were getting sketchy with hunters and bears and ensuing nightfall so we turned our trusty bikes towards FS 5003 back to Glouchester Gap. At the intersection of 140A and 5003, we picked up a dog that had been left and since we knew there were hunters on the other side of the ridge, where we were headed, we took the ol' boy with us, hoping to find one of the hunters rounding up their lost ones. We got to Glouchester and got ol' boy a ride home after which we turned our wheels towards White Pines. Downhill all the way!

Day 2: Up for the rider meeting and to get the passport for the day, then it was back to the tent to review the day in my head. Kirstin was a bit difficult to get stirring but I made the most of the morning by getting some hot oatmeal and stretching the legs a bit. We left camp about 9:40am with the plan to get the mandatory CP at Turkeypen Gap swinging bridge, while obtaining the CP at the intersection of Black Mtn trail with Turkeypen Gap trail on the way. This was not our best day at all, but we made the most of it.

Here are the pictures: Day 1
Kirstin's handstand at Butter Gap 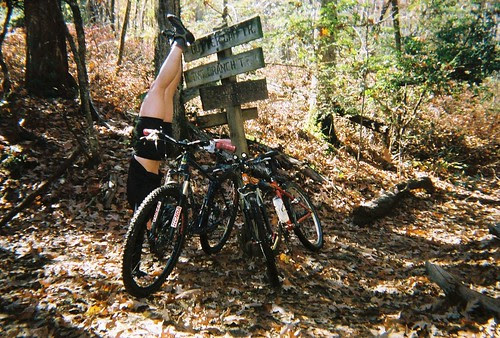 Me at Farlow Gap (finally)! 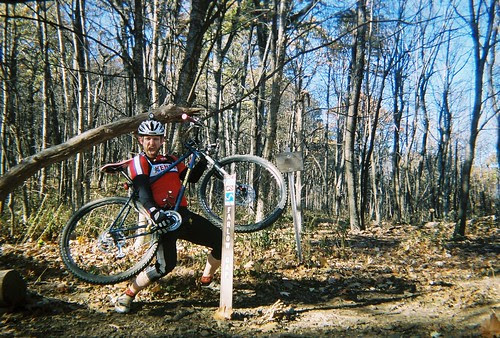 Kirstin, just after her swim in this muddle 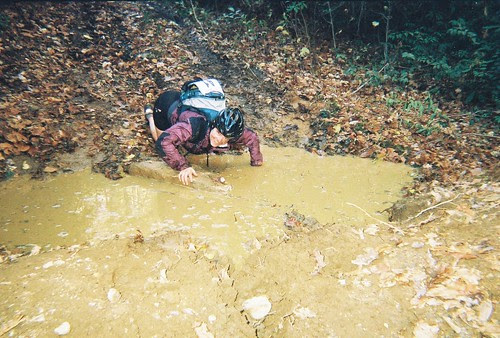 Me at the intersection of FS 140A and FS 5003, on our way back to Glouchester Gap 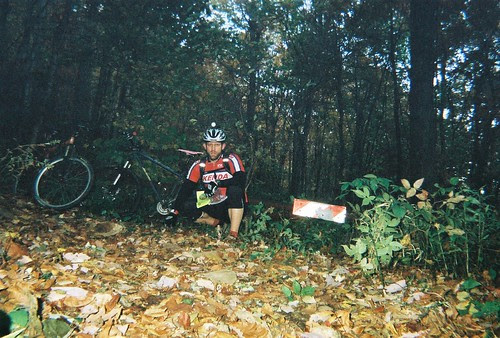 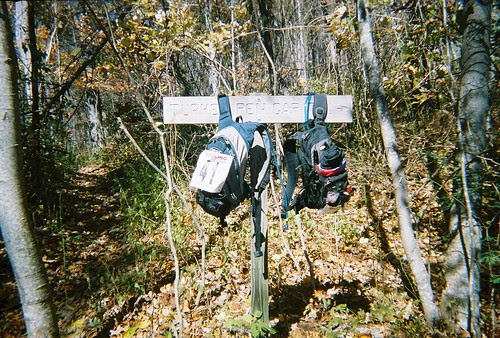 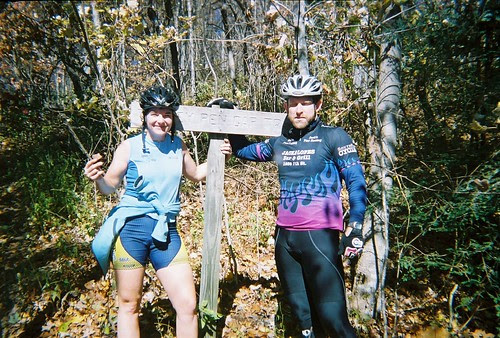 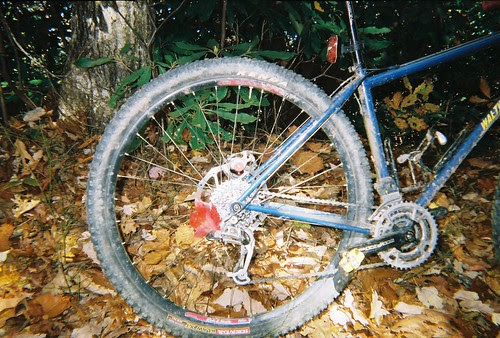 And here we are at the swinging bridge near Turkeypen Gap. We were a little drained! 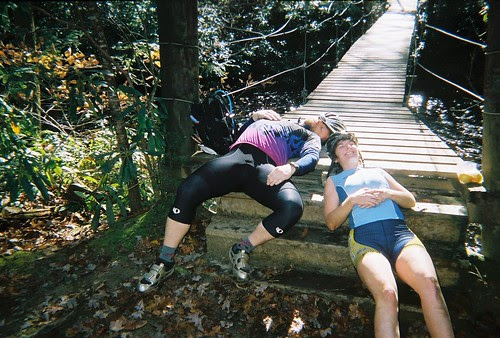 Again, a great weekend even if we weren't in the running. It was nice to meet Mike Brown and it was good to see folks like Brado, Zach, MUM, Peter, and Eric again.

Thanks again, Eric, for putting on a great race that is atypical and by far, not the norm! Each race of yours reminds me why I really got into mountain biking in the first place.
Posted by Charles Myrick at 11:48 PM No comments: