Wednesday night in the 'Stan. There's Thursday, my last full workday of this trip, then Friday it's off to the ol' Kabul International Airport for a marathon trip home! Am I excited? You bet your bottom dollar there, lil' missy! However, I will say that I'll miss some things about Kabul-town while I'm home. As much as I miss home right now, I'll likely not look at my house the same way. I definitely will not view my life as I knew it the same.

Once you experience something like I have here, your perspective changes -- it has to. For instance, I'm about to go from being one of a handful of people without a loaded gun on my hip and shoulder to getting locked up for even carrying an unloaded one. I'm about to leave a place where women have no say whatsoever....where religion dictates much of everyone's life....where contradictions and social class take first chair to most other things. I'm leaving this and I'll be able to play in my front yard with the doggers. I'll be able to invite the local bum to eat dinner with me and only risk ridicule, not imprisonment. I'll be able to drive down the road and not wonder where the IED is or where the RPG is going to come from. I will sit and watch those darn C-130's at Dobbins AFB from my front yard and remember my flight on one -- thanking God Almighty the Italian pilot didn't make a banking turn like those crazy blokes at Dobbins!

Ya know, I've sat and listened to friends and other people talk their glorious and fun adventures abroad and I've envied them. They talk about friends they've made oversees and getting to go visit them, sometimes in lands new to both. I've been jealous and a bit mad at myself for not being in a position to do that. Now I too have wonderful stories of my own and some great new friends in a strange and beautiful land. Only difference is, they'll never be able to leave and go experience someplace new. Oh they dream it, don't think for a moment they don't! They just will not have the chance...the money...the permission to go somewhere else. They won't, that is, unless someone helps them. I'm glad that God blessed me with the chance to play a small role in reshaping their future. My only hope now is that I can do enough!

Honestly, I dread going back to the office and having to face office politics and...(gulp)...spreadsheets...company policies that MUST be signed. I dread it because they are all meaningless. They serve no REAL purpose in this world. I sat with (3) Army colonels around a dinner table the other night under a starry sky in Konduz and we all feel the same. Powerpoint presentations mean nothing. Spreadsheet reports -- right, they're REAL important. Someone in the office getting all upset because the toner is low in the copier. I look out my window here and see children --and adults-- afraid of walking down the street. I watch jets fly over and wonder if they'll be shot down. I work with people who cannot afford firewood to keep their house -- and wife, and 6 month old child warm. Yet I also have the blessing of working with Americans who have chosen to be here helping. Yes, most of the soldiers I'm working with CHOSE to be here, a few have been here more than once -- that's how important they see their work here. I count it an honor and blessing to stand with them.

Yea, I'll miss Afghanistan while I'm home, I think. Mostly I'll miss my new friends and wish they could just once have the luxury of asking "Honey, where are we eating dinner tonight?" or "Where will I go on vacation this year?" or "Hey man, you wanna go to the ballgame tonight?" 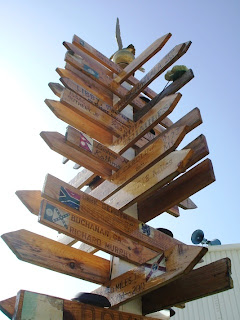 First, the Easter sunrise service yesterday was really awesome! There was a choir, doves, great preachin', and about 100+ people. I was talking with Chaplain Fisher at the gym tonight, and he heard today that it was the only sunrise service held in Afghanistan yesterday! Now THAT's a testament to the the chaplain staff at the base here. I have a couple pictures which I'll post below. 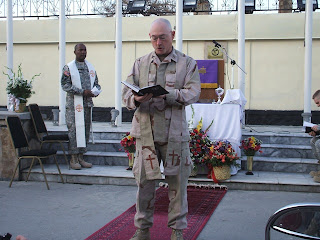 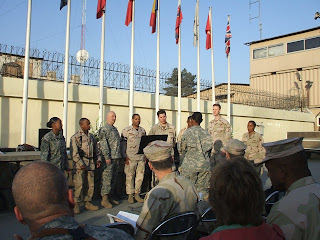 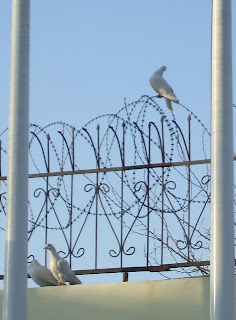 Doves that were released but didn't stray far


I actually had to leave the service just as Chaplain Shaw was gettin' cranked up because we had a convoy to the airport for an 8am flight to Konduz, which is province and a city, about an hour flight north. It would take about 2 days to drive there, because the mountains are incredible between here and there! Kabul sits at about 6500 ft above sea level and is surrounded by moutain peaks reaching over 11,000'. Konduz sits at about 1200' and is surrounded by some of the same 11,000' peaks! It was beautiful. The area was lush, the city clean, the people friendly (just as they've been all over), and there are remnants of the Soviets all over the place. It was obvious they got their butts handed to 'em -- there are tank shells that are upside down, fighter jets in pieces, I could go on. The weather was great -- 85 degrees and sunny! I think I actually got a minor tan! 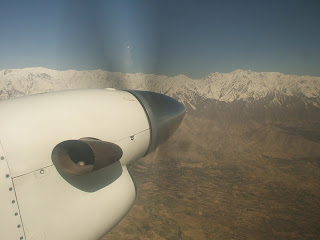 Of props and peaks. Just north of Kabul 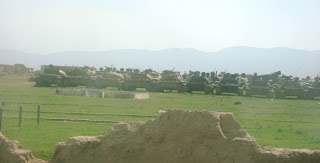 Afghan surface to air missle delivery vehicles. These have long been retired.

So, on Sunday morning, I found my new dreamland -- Feyzabad (pronounced 'Faiz-a-bad'). It's this little village thats nestled in a grand valley at like 3870' above sea level. The peaks surrounding it range from 7700' to 9800'. We landed on this Soviet runway that was built using corrugated panels for fast construction. There's grass growing through the panels and the only thing you see coming in to it is a faint white line on the ground. The flight into the valley was gorgeous -- pictures do not do this place justice. I was wishing for a video cam! I have a picture below -- and no, that's not Colorado! 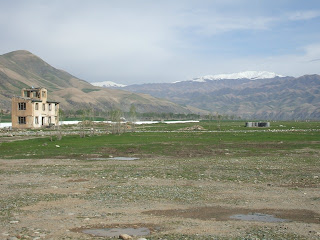 View of the valley of Feyzabad looking north from beside the runway.

One last word about Konduz....the Afghan soldiers and police there are really a few notches above the others I've seen in this country. They all wore their wool uniforms squared away -- even in the 85 degree heat, they saluted our colonels (and me for some reason) with a snap and at attention, and basically you can tell these men take pride in what they are doing. That's not to say the others don't, and after mentioning this as a product of the trainers the U.S. has there, one of the instructors was quick to respond that it's the people in that region. They take more pride in everything they are and do -- and it shows. The city of Konduz itself has sidewalks -- not mud-- so folks walk there and not in the street. The markets were clean and colorful. Some burqa clad lasses wore white instead of blue or black. The pride of the tribes living in Konduz really shows through and it was a joy to see!
Posted by Charles Myrick at 9:52 AM 1 comment: