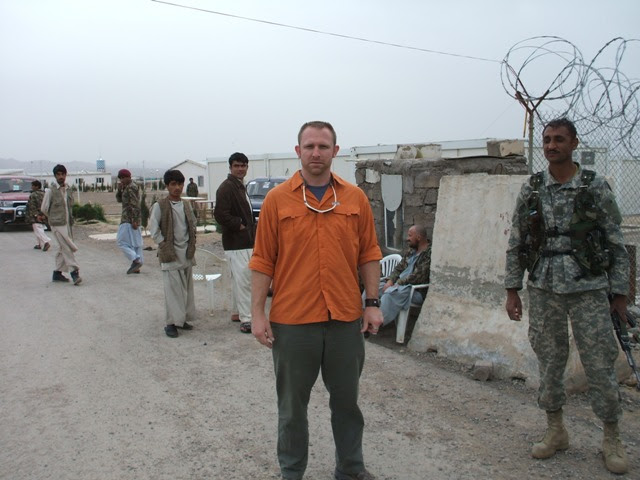 So today was a day of firsts for me:
(1) first time in a private jet
(2) first military convoy
(3) first time getting a workout OUTSIDE in Afghanistan (WOO-HOO!!!)
(4) first time seeing people live like the Patriarchs of the Christian faith

I'm in Herat, Afghanistan and yes, there is obviously internet access here, but not everywhere, just in the military compounds. This province is beautiful! It's mountainous with green fertile land. The towns and villages are amazing -- they're mud hut villages, well, ok not all of them. You've likely heard that much of the Afghan population is nomadic. Well, I'm here to tell ya, it's true. It's beautiful! All over the countryside are flocks of sheep, goats, camels all being tended to by the shepherd. The nomadic people live in these huge brown tents -- which, once you experience the wind here, you gain even more respect for them! In the coming months, I've heard that the wind will howl across these parts at 40-50 mph for about 140 days. As we would drive past, people would run to road and wave at us -- it was quite the sight to behold!

Another sight is the convoy itself. We had (3) HumVees and (4) pick up trucks (1 Ford and 3 Chevy's). If you had told me 6 months ago that I'd be cruising through Afghanistan in a Chevy truck listening to Toby Keith and Kenny Chesney, I'd have asked what you were smokin'! Well, with the sun shining down from Heaven, there I was with guys from GA, MI, NY, NJ, and Afghanistan cruising down the road (oh, this one is newly constructed so it's paved and smooth) singing out Kenny Chesney tunes in the backseat of a Chevy truck! Good stuff! Turns out one of the guys in our convoy is from Macon, GA and lives not far from my folks -- it's a small world, I tell ya.

I'll shut up in a minute and get to some pictures, but this is important. I got to go for a run today in the great outdoors! The headwind was strong but WOW was it nice to be outside and not on a treadmill or spin bike. 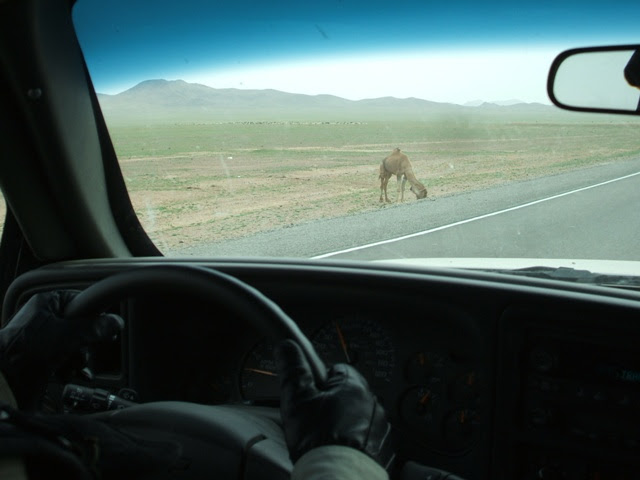 This camel got away from the herd. 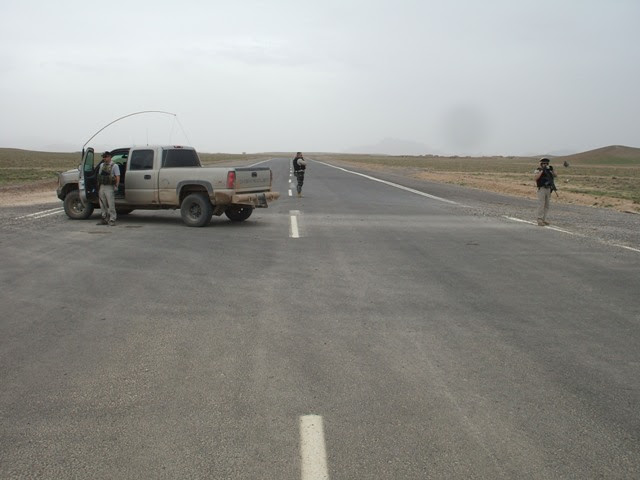 Don't fret -- we're well guarded out here! Notice the "Heartbeat of America" made it to the 'Stan! 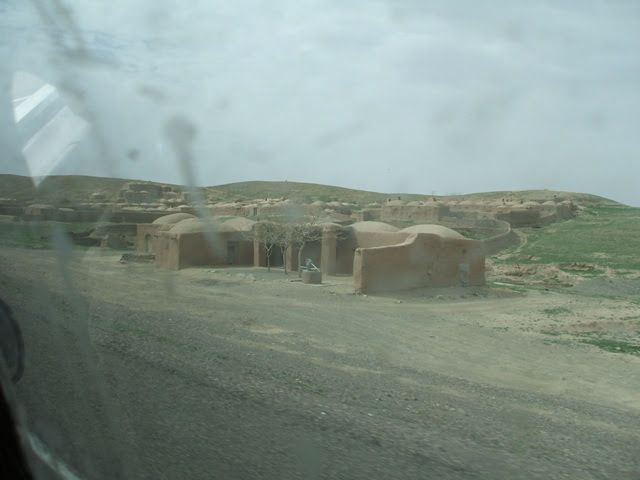 Typical mud hut village (sorry for the blurred foreground, but this was taken at about 50 mph through armored glass which is about 2" thick). 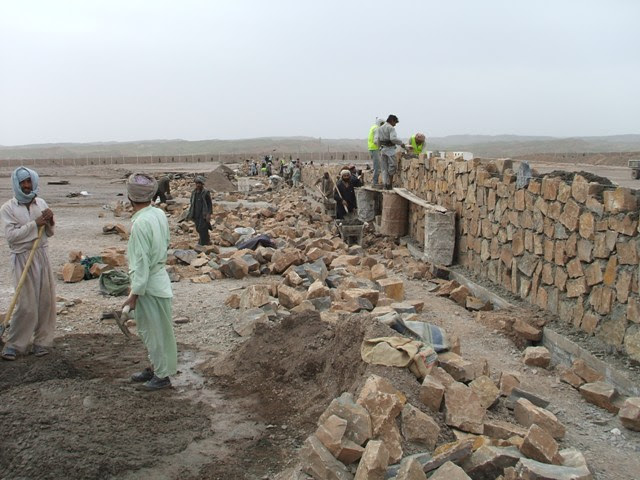 Construction geek coming out.... here's a wall being constructed for security at one of our camps. 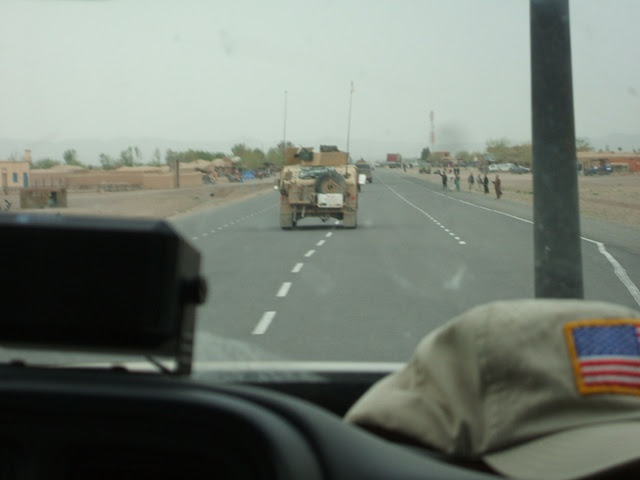 Not a bad view, eh? Notice the kids on the right side of road waving at us. This was pretty typical of everyone we saw today. 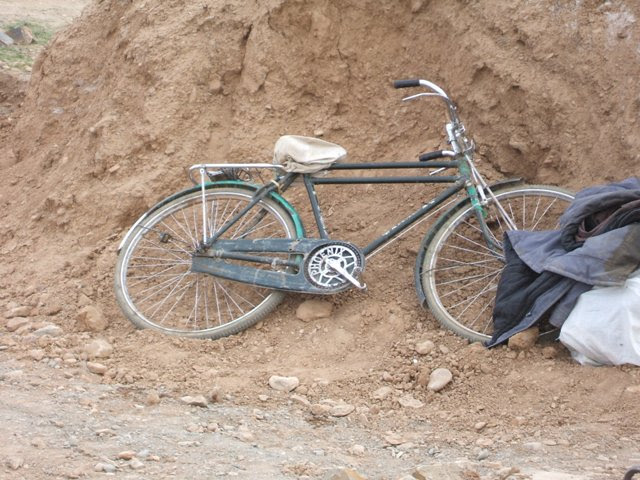 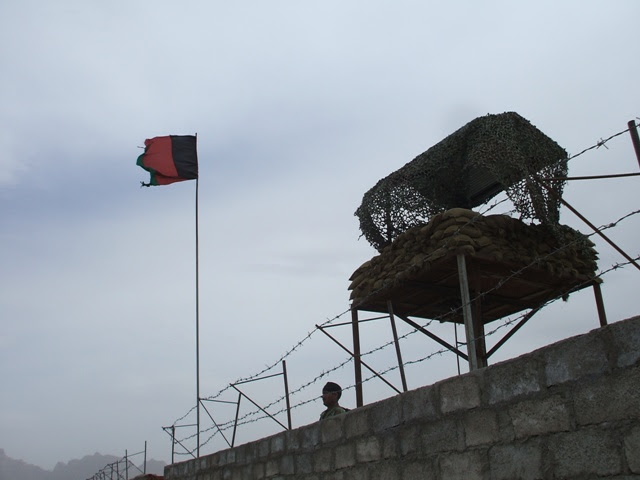 A guard tower in Herat. The flag may be tattered but the spirit of the people is not. The soldiers here get paid $70 / month. They share one rifle between (3) men. Yet they stand up and guard their country from would be attackers, and they believe in a better Afghanistan, that's why they man their post.
Posted by Charles Myrick at 10:34 AM No comments: